Last Friday, May 12, the school witnessed the kickoff of what promises to be a historic and pioneering event: AIM Sportfest 2017 “Breaking Barriers”. Why Breaking Barriers? Well, the HR Department (headed by Angel Aniag and Rhye Bautista) and the students’ Sports Club (headed by Cham Luna) worked together to make this happen. For the first time in the school’s history, all members of the AIM community: the staff, faculty, students, and outsourced personnel will all be playing together and competing against one another in various sports categories.

Four teams were formed for this spectacular event, consisting of a healthy mix of students and staff:

The Yellow Rangers (I know, original AND trendy right?)

The Purple Rangers (apparently, the recent movie made this name really popular again)

The Kickoff, hosted in the guests’ parking lot, started with a prayer led by Cham Luna of MBA 2017 and the singing of the National Anthem by Ms. Cheska Compuesto of the Dean’s Office. 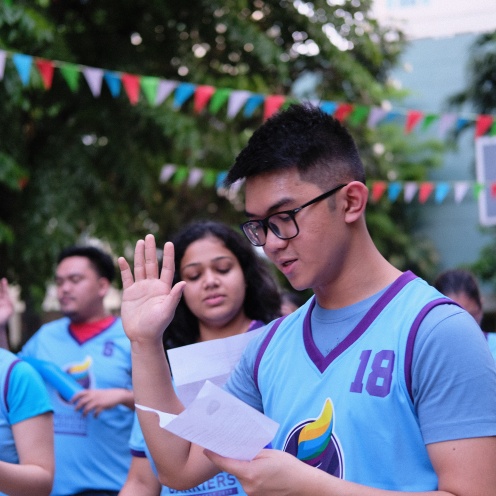 President Jikyeong Kang gave the opening remarks. She talked about the first-time-in-school’s-history moment, emphasized sportsmanship and unity, and excited the eager crowd of students and staff.

After the President’s speech, Mr. Joel Gallanosa of Finance Services Group led the oath of Sportsmanship. It was a loooong oath. I swear at least 67% of the participants were just mumbling random words after the “state your name” part. But hey, it’s the thought that counts right?

And after the mumbling came the shouting! The teams performed their respective team chants:

The Yellow Rangers, led by Frenzy’s bottomless energy and enthusiasm, performed admirably despite being the first to present.

The Purple Rangers, led by the charismatic Kuya Mario, cheered with vigor and vibrance. You can tell the performance was planned and scripted because of, well, the scripts held by the members.

The Blue Ball Baboons started with a dance number led by Ms. Anika De Leon of CSO to ignite the crowd! They even had pom-poms to spice things up! 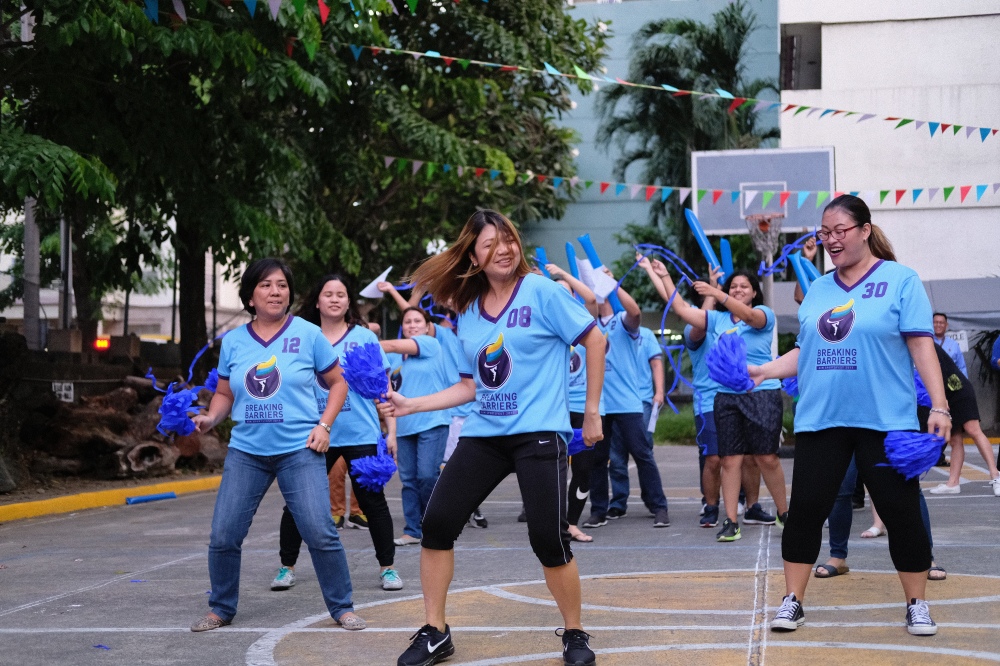 Speaking of spice, the Green Chilliz wrapped up the cheering presentations with a very passionate chant, led by the even more passionate Sujit Varma. It was like witnessing the lovechild of Leonidas and William Wallace inspiring his army to battle.

Of course, like the Olympics, the Sportsfest games have to be officially started with the torch lighting–spearheaded by President Jikyeong and the team captains of all 4 teams. I don’t know about the others but this symbolic torch lighting really ignited a heated passion and fiery spirit inside me. Sorry about the puns, I had to.

The first game was a creative relay: a dangerous combination of Sack Race and Maria Went to Market. Despite this being the first time to play with one another, you can tell the students and staff were very comfortable working together. Teams were strategizing on how to jump with the sacks and on how to wear the tight dress of Maria. 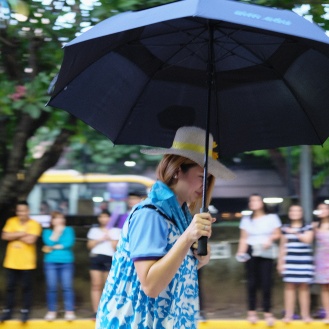 It was a surprisingly close game with Purple team winning in a spectacular come from behind fashion. Blue team, who finished second, trailed by only a millisecond, it was THAT close.

The second game was like watching a talent show from AIM’s own version of Pep Squad and varsity Track players. Nope, this wasn’t another round of cheering or relay, this was Chinese Garter.

All teams had to jump over the Chinese Garter without their hands touching the line. As the rounds became more difficult, players had to be more creative:

Some did scissor kicks.

Some looked like track players in a hurdle competition.

And some displayed jaw-dropping athleticism with their smooth cartwheels.

The crowd had a good time watching and cheering all the players flying around, back and forth the Chinese Garter. In the end, a lot of players happily finished all the levels, with Purple Rangers winning with the most number of players to survive. I’m just happy no one tripped and landed smack face-down-first on the ground.

The last game of the night brought nostalgic memories to everyone: Patintero. As expected, teams strategized hard for their lockdown defensive plan. Game 1 between Blue vs Green dragged on boringly with only the clarification of the rules being the most exciting part. Game 2 between Purple vs Yellow however, produced better highlights with Yellow Rangers winning in blurry, speedy fashion. I swear I just blinked and then chaos ensued.

Overall, it was an excellent Sportsfest kickoff. Lots of balls could be found all over the place that afternoon. There were fish balls, squid balls, and ice scramble among others being served by various food stalls.

More games are in line for all our players for the months of May and June. There’s basketball, volleyball, badminton, bowling, table tennis, card games, LAN games, and darts.

To date, after the parlor games, Purple Rangers lead the tournament with a commanding 55 points. Coming in at second are the Yellow Rangers with 40 points. Blue Ball Baboons closely follows at third with 30 points. And finally, perhaps the Green Chilliz had too much “chill” in them as they tallied a meager but respectable 25 points during the kickoff.

Stay tuned as we cover the rest of this year’s AIM Sportsfest: Breaking Barriers, as four teams battle their hearts out for the ultimate prize: bragging rights!

This post was written by a guest writer, who chose to remain anonymous. Photo credits: Mark Castaño and Somiya Yadav of MBA 2017.