The moment that the Immigration Officer had stamped my passport, and said, “Welcome to Israel,” I had begun my quick but unforgettable journey to one of the most historic places in the world. Aside from the many wonders to see and the cultural and religious journeys to embark on, Israel nowadays is known as the undisputed “Start-Up Nation”, with the highest “start-up per capita” in the world. Thousands of start-ups can be found in this tiny nation, only as big as the state of New Jersey.

My university sponsor in Israel was Technion University. It is located in a sprawling hillside property with a lot of trees and a healthy mix of both old and new architecture. It was built during the rule of the British as the first institute in Israel to train its future leaders in science and business.

Our curriculum for the GNAM week was a mix of both lectures and company visits. The first session was a getting-to-know session with the other participants in the program. It was followed by the history of Technion and how Israel became the start-up nation that it is now. We were given the chance to view their self-driving automotive racing lab as well as their robotics lab that housed advanced equipment that schools here in the Philippines can only dream of. After this, we were briefed that we would need to work in learning teams (we were able to choose teammates) with the final output being a lean start-up business plan. The day was capped off by a fellowship night in an Israeli restaurant which served meat and veggie dishes that are of Mediterranean in origin (the lamb kebab was really good).

On our second day, we talked about culture and how it influenced Israel’s rise in the start-up scene. After this we had a class on negotiations because it is one of the most important skills that entrepreneurs need to gain the funding to turn their dreams into reality. Design thinking was the next subject, where we focused on the customer journey and how empathy is the root of all effective start-up design. We then proceeded to GE Healthcare’s labs in Haifa wherein we got to see their latest ultrasound equipment that was filled to the brim with new technology, even including AI in all of its functions.

We then went on a tour of the city of Haifa, going to the Bahá’í Gardens as well as visiting the Church of Elijah. We had a taste of the mustard plant’s flower (as this is one of the parables of Jesus in the Bible). We also went to a baklava dessert factory and one of the best places to have shawarmas. I went with the students from Yale and decided to have a sit-down dinner with wine in a Lebanese restaurant in the German Colony.

Our third day was equally fun as we all assembled in Technion to ride the bus to Given Imaging. It is one of the well-known mature companies in Israel which creates the ubiquitous PillCam. This device enables endoscopy to be painless because patients just need to swallow a pill that contains cameras so that doctors can see if there are formations that can cause cancer. Amazingly, this revolutionary product was developed by an engineer who previously designed missiles for the Israeli defense sector. Employing the same tracking technology from the missiles and miniaturizing it made the PillCam an astounding success.

After lunch, we then went to the TAGLIT Innovation Center wherein we saw almost all the innovations that Israel has created so far. Among all the apps and equipment that they had created, the most amazing for me was their water dispenser which did not require a source of water to function. What it did was to suck in moisture from the air and send it through several filters to produce hot or cold water. For a country that is lacking in fresh water sources, this invention is truly remarkable. At the time of my visit, it has firm orders from both Asian and African countries for its industrial-sized variant. Another amazing innovation featured in the TAGLIT Center is the Iron Dome System. The Iron Dome intercepts rockets and has continuously made Israel safe from attack. During my visit, it was even put into action because rockets were fired into Israel after four years of inactivity. The Iron Dome successfully intercepted the rockets.

After that visit we had three more lectures from industry experts about their failures and successes. One of the speakers talked about the future of Online Retail and I was able to spark a conversation with him thanks to one of our cases here in AIM from Creating and Implementing Growth Strategy. Before the day ended, we had one final talk with a Venture Capitalist where he gave a speech on how to secure funding for start-ups. 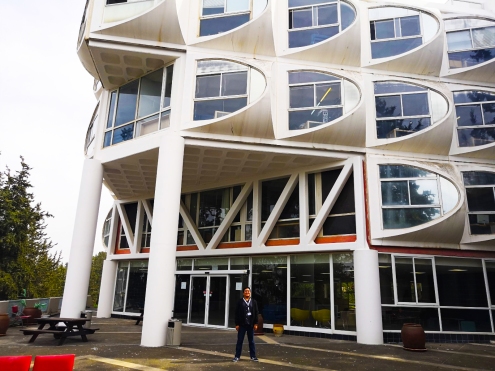 On our final day of lectures, we had talks from executives of Checkpoint Software, the largest IT security firm in the world. I was able to participate once more thanks to another case that we tackled here in AIM and I was enlightened by the speaker because of his very timely and up-to-date insights. Before our presentation, we had our final talk about Innovations in the Start-up Nation of Israel and how these Innovations helped jump-start Israel’s economy.

After this, we had time to finish up our presentations and finally present. My team was composed of students from Hong Kong University of Science and Technology (HKUST), with me being the lone AIM student. We presented the concept of NatalPal or a one-stop pregnancy app which aimed to remove the long lines and agony of pregnant women in China. We performed really well in the presentation and especially in the question and answer portion by the VC judges. In the end however, we only achieved second place, being edged out by the concept of a shared kitchen which targeted chefs with no business experience to have successful restaurants.

It was a great moment as we said goodbye to our fellow classmates from the program after we had received our certificates from the team of Faculty from Technion. We had a final toast (with real champagne) to our successes and future successes.

In order to make the Israel experience complete, the Technion team took us to Jerusalem for a guided tour into Ein Kerem where we saw the church that was made for Elizabeth, the cousin of Mother Mary and the historic place where they met to announce to each other that they were both pregnant. It was truly a breathtaking experience to walk the footsteps of the people that are in the Bible, especially that of the Mother of Jesus.

This was the moment where I said a momentous goodbye to my friends from HKUST who decided to stay in Jerusalem for the night.

The GNAM experience in Israel is something that I would recommend to everyone who is interested to know more about its culture and how it can drive oneself to inspire more people to follow its way of innovating. But more than that, I would always remember Israel as a place where I forged new friendships from different nationalities, and made new buddies who have opened their hearts to have a new friend in Manila, like me.